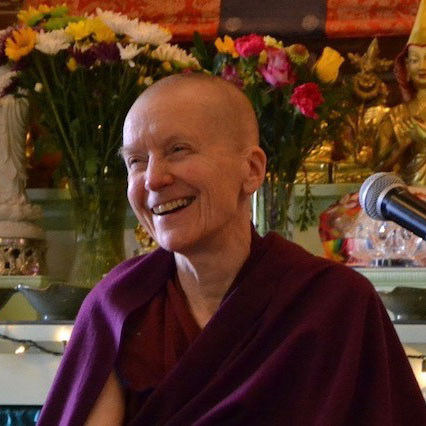 Sangye Khadro (Kathleen McDonald) was born in California, and began studying  Buddhism in Dharamsala, India in 1973. She became a Buddhist nun in Kopan Monastery, Nepal, in 1974, and took bhikshuni ordination in 1988. Over the years, she has studied with various teachers including Lama Zopa Rinpoche, Lama Thubten Yeshe, and the Dalai Lama. At the request of her teachers, Ven. Sangye Khadro began teaching in 1979, and since then has taught in many countries around the world. She is the author of How to Meditate and Awakening the Kind Heart (Wisdom Publications). She completed the Masters Program in Istituto Lama Tsong Khapa, Italy, in 2013, and is currently residing in Sravasti Abbey and teaching online.