“The minute we take the vows (until death for Pratimoksha vows, and until enlightenment for bodhisattva and tantric vows), day and night we collect merit all the time by living according to those vows. It is a cause to receive a good rebirth in your next life. If it is performed with renunciation, it becomes a cause to achieve liberation from samsara. If it is performed with bodhicitta, it becomes a cause for enlightenment. Then, day and night become a cause for enlightenment and to enlighten sentient beings. In the Mahayana practice, the goal is not just to achieve enlightenment yourself, but to lead all beings to enlightenment. Your goal is clear.”  –Kyabje Lama Zopa Rinpoche

Refuge: Refuge in Buddhism is a ceremony, a commitment, and a statement of faith. A practitioner requests the refuge ceremony from a qualified teacher; some regard this process as conferring upon them the state of being a “Buddhist.” The rituals of the ceremony may vary slightly according to the teacher, but the core element is the practitioner’s commitment to seeking liberation from suffering. The triple gem in which one takes refuge is the Buddha, the Dharma (the teachings/path), and the Sangha (the Sangha jewel one takes refuge in is strictly the community of monks and nuns; in the West, the term sangha has also become common parlance for a community of practitioners).

The Five Lay Precepts: According to Buddhist teachings, the practice of ethics is one of the three principle forms of training that Buddhists engage in; the other two being meditation and wisdom. Ethical precepts (vows) guide a practitioner in examining cause and effect (karma), as well as how the renunciation, patience, and honesty required of this practice illuminate the teachings.

The five vows to be kept by a full upasaka or upasika (Tib. ge nyen, “nearing virtue”) are to avoid:

Killing;
Taking what has not been given;
Sexual misconduct;
Telling lies;
Drinking alcohol.

In this course Geshe la will teach onthe meaning of the five lay vows as well as the commitments associated with taking refuge, and will explain how these vows and commitments form the foundation of a Buddhist’s spiritual life, as well as to help us understand how to keep them purely. 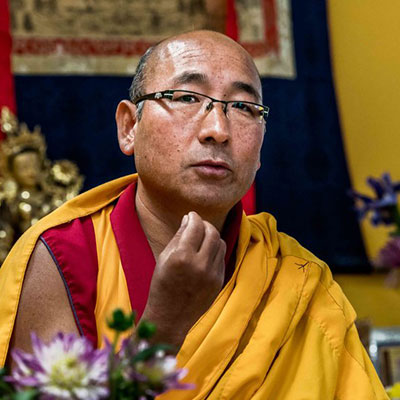